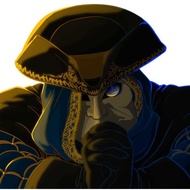 Kalei Works
Movies • Writing • Culture
There is a deluge of cinema yet a dearth of quality, and we humans emulate that which we observe. Cinema Aficiona seeks to separate the wheat from the chaff and analyze what speaks to the human soul, fires the imagination, and appreciate what makes a truly good story.
Interested? Want to learn more about the community?

Good afternoon Cinema Aficiona! Now that we've finished our 5 week run of "Yojimbo", "Yojimbo the Fanfiction" parts 1-3, and "I Can't Believe It's Not A Western", I think it's time we take a bit of a turn on the subject matter and present an iconic and timeless movie that falls squarely in the realm of the Comedic: The classic 1980's film, Airplane!

This parody of the popular disaster film genre of the 1970's took a near 1-for-1 base from the 1950's drama "Zero Hour" and turned the tension-drenched plot on its head with slapstick, visual gags, word play, and unexpected joke resolutions.

Airplane! was once "proven" to be the funniest movie of all time with a laughs-per-minute calculation of 3 per minute in 2012, incredible considering it just turned 40 last year. Likely a target for the current cancel cult these days, we'll be watching the original and uncensored version. If you've seen it before, you know you're in for a solid 90 minutes of entertainment. For the newcomers, prepare to reset your baseline for what constitutes a proper comedy.

Tune in with us this Saturday the 21st at 0700 PST for a riotous chaser to our month long drama fest.

00:21:54
2
View All
0
Reply
Interested? Want to learn more about the community?
What else you may like…
Videos
Podcasts
Posts
Articles

Fantastic video from @BigBlueVA for our weekly Cinema Aficiona meetings! I love this, absolutely wholesome.mp4. Thank you, Andrew!!

Continuing the live-read of Clara & The Nutcracker.

During the pursuit of the Levithian cultists, the group was surprised to run into the very person they’d slain a few nights prior; the cultist mage, Varris Toll. While he was reticent to cooperate with our heroes, his newfound status as an extremely rare type of undead made him target for the spell component savvy, and he resigned himself to trading protection for his inherent ability to track down the source of his undeath: His lady love, Vynn les Fairchild. As he led the party onward, their destination soon became clear. Vynn, and the gnoll war party she travelled with, were heading towards the location of a historic tragedy.

Pushing into the infamous Dead City, our heroes first sought refuge in the Temple of Kahl which stood relatively undamaged within the ruins. However, what should have been a place of respite, had been defiled by a great evil from the past. One of the Generals of Let’Tur Val himself; Ethirr Nux, sat in deathless vigil midst the unhallowed cathedral...

The evil exploits of the nefarious sorcerer Balxiros Nul Sagar were once well known. He reigned supreme over the lands, having successfully resurrected Levith, God of Evil and the Draconic. After a great battle, the sorcerer was defeated by an unlikely cadre of heroes, ending his tyrannical rule.

Even after his defeat, Balxiros’s corpse continued to exude malefic control over any who were near, and thus, it was cut into parts and sanctified within five of the greatest cities in the known world. Additionally, Balxiros’s eye and clawed thumb, plucked and cleaved from him during the battle, were passed on to the children of the House Navari for generations.

Now, over a century later, time has numbed collective memory, and the world has begun a dark march towards evil. Horrific acts of violence seem to become more and more commonplace as a cult long thought extinct sews chaos across the realm.

For this blessed evening, please enjoy my new favorite animated Christmas feature with friends, family, or whoever you are sharing this wonderful holiday with tonight.

The last few years have definitely taken a toll on my creative drive. Still forcing some occasional drawing. Hans and Clara vs. beasties. 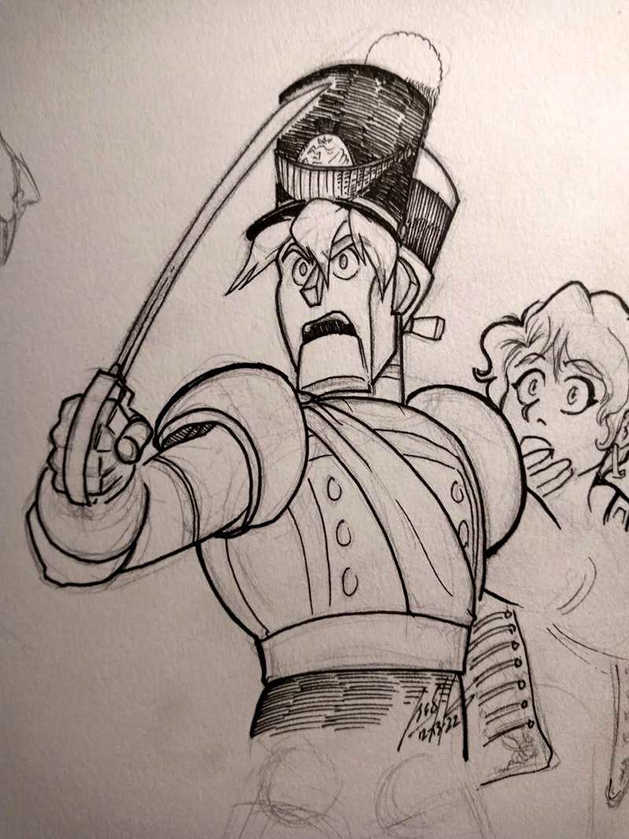 Morning gang! Wanted to give a heads up here before anywhere else: If you haven't purchased Clara & The Nutcracker yet, I've arranged a discount with my publishing platform for the holidays.
https://www.lulu.com/shop/tk-merchant/clara-the-nutcracker/paperback/product-q82222.html?q=clara+nutcracker&page=1&pageSize=4
Keep an eye out for incoming art, analysis, and updates for Christmas time! MERRY CHRISTMAS!! 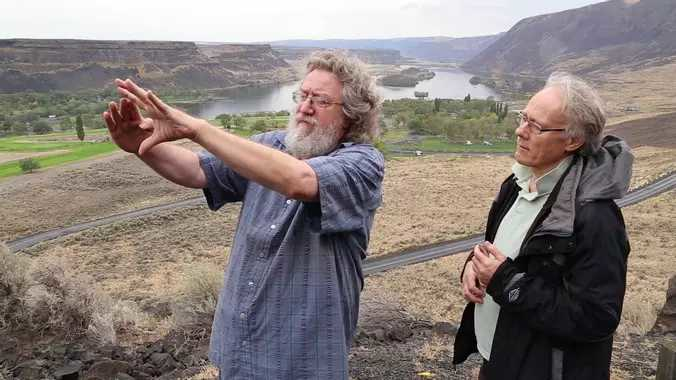 I have just finished Graham Hancock’s outstanding new series “Ancient Apocalypse” which presents very clearly and thoroughly a number of anthropological and historical theories and assertations that have always been at the forefront of the collective consciousness of mankind. These subjects are discussed side-by-side with uncensored and phenomenal site evidence, new archaeological discoveries, and impressive all-source analysis that makes these propositions, in my estimation, self-evident. In simpler terms: Graham said Plato was right about Atlantis and the “academics” are angry about it.

Ancient Apocalypse is the first audio-visual presentation to take concepts such as The Lost Civilization of Atlantis and Catastrophic Destruction of a Human Civilization outside of the realm of myth, and plant them firmly in historical fact. Plenty of people, hinged and otherwise, have made similar assertations in the past, but due to their mocking, censorship, deplatforming, or the exploitation of personal shortcomings by critics, very few public voices have dared to consider these events as something to be taken seriously until now.

I will say now, for those of you reading this who have not yet seen Graham Hancock’s Ancient Apocalypse, please take the time do to so in the manner most convenient to you, which hopefully supports Graham’s financial welfare and future endeavors.

Now that the stage is set, getting to the subject that made me sit down and write my first analytical post in years, I will cop out and simply copy pasta the off-the-cuff ranting I did in a private group chat on this subject as I watched the Joe Rogan Experience Podcast #961 - Graham Hancock, Randall Carlson & Michael Shermer:

This guy is trying to claim because there were no metal tools found at Göbekli Tepe, it can't be an "advanced civilization-made location" when it is self-evident from the dating on the site putting it at 12,000 years ago and the fact that it's BEAUTIFULLY CARVED STONE PILLARS AND ALIGNMENTS TO SIGNIFICANT ASTRONOMICAL MARKERS. He’s acting like that's not from a civilization more advanced than hunter-gatherers that allegedly couldn’t even sustain an agrarian presence, could only build huts and use tents, and couldn't construct large stone buildings. This guy continually moves goalposts and brings up things that have nothing to do with the subject matter to derail or make false equivalences.

Graham: We have, according to the current “accepted” human society timeline, the world's first perfectly north-south aligned building, and astronomical referencing carved in stone.
Shermer: Maybe.
Graham: Maybe?? I'm citing the measurements of the site from the guy who discovered it!

This guy can't even look Graham in the eyes while he speaks. "Because ONE journal finally published ONE article about a fringe theory that disproves any mass attempt to keep alternative theories down." - This Guy

LORD GIVE ME PATIENCE. I jumped ahead to where Graham and Randall were talking, the midwit chimes in again, and says something so absolutely batshit insane that Joe Rogan breaks his usually neutral stance and calls him ridiculous.

Shermer literally compared someone painting on a wall to creating the largest megalithic astronomically aligned stonework site in the world. He claims the level of skill is comparable, and both are impressive. Granted, yes, painting with three-dimensional perspective is impressive. However, it’s nowhere near the cognitive and societal accomplishment of building something like Göbekli Tepe, and even inferring that is asinine at best and nefarious at worst.

The They’s of the world really don’t want the idea that “civilizations just as advanced as our current one were wiped out in a cataclysmic event” to take root. If we are at the pinnacle now, everything is justifiable. All fears of "going too far" and "shouldn't we be more careful?" go away. They get to say "We're the smartest, we know better, we’ve never had these opportunities before, we’ve never had better technology," and conduct whatever evil they want under the guise of progress. Additionally, ANYTHING that points to the Bible being true scares the shit outta these people. Gotta keep it "Haha silly retards think there's a magic man in the sky".

Shills: Plato was a great Historian, we base a lot of ancient history off of his completely provable claims.
Graham: What about him giving explicit and detailed historical account of what happened to Atlantis and its advanced civilization that he got from the Egyptians?
Shills: No no, Plato was clearly a lunatic about that one thing.

Shermer then weasels "There's Graham, he seems so reasonable-" home boy is literally insulting Graham Hancock to his face. Shermer then goes "Graham, I'm sorry, I didn't mean it to sound like that" after Graham calls his insult out. Shermer then gives a non-apology in an absolutely sociopathic manner.

Every time Randall Carlson gets his turn to talk he just nukes Shermer’s arguments from orbit.

Ohhhh perfect example of more gaslighting. Joe calls a colleague of Shermer’s, guy named Marc Defant who has misrepresented Graham’s positions in the past to discredit him. They want to set the record straight and they get him on the video call line. Marc starts off with "Well I'm sorry if I disturbed and upset you," when Graham was neither disturbed nor upset, but that statement now tries to reshape the entire interview into "Graham is weak and his feelings are easily hurt". And then when Graham calls him out, he immediately gaslights again and infers that Graham refuting him was "wasting time", to which Joe chimes in immediately going "No no, we have plenty of time."

This is GOLD analysis on gaslighting!

After doubling down on misrepresenting Graham’s arguments, it gets so bad that Shermer chimes in going “Marc, we actually did misrepresent him,” because even Shermer realizes how terrible this looks for the both of them.

At this point I stopped watching the interview, it was just too tedious to hear the continual “nuh-uh” level rebuttals to Graham and Randall’s rock-solid info. And for anyone wondering why I consistently malign, dismiss, and mock “academia”, this interview is the perfect demonstration.

While many people will defend the parties involved in this discussion because of the “rational and polite” way in which it was conducted, I say that’s BULL. When you have one party insulting and belittling the other consistently, to which one side has to continually defend not only their argument, but themselves, that’s not a rational or polite debate. It’s exhausting, tedious, and serves to give the illusion of “both sides having merit” to the passive listener.

Graham and Randall’s analyses speak for themselves, so the only argument that people like Shermer can heave at them is one that brings attention to other subjects and other people. They must tie one person’s reputation to another and discredit them both, because the analysis is solid.

Academia has rewarded this faux debate technique along with groupthink and consensus for so long that it has destroyed the very concept of critical thought. Consensus is the opposite of discovery and the antithesis of invention.

“The finest candlemakers would have never thought of the lightbulb. The advances can never be peer reviewed; they come from the fringe.” – Allan Savory, Ecologist

Read full Article
2
View All
0
Reply
See More
Sign Up To Kalei Works
Sign Up for free to see more from this community or subscribe to Kalei Works for $5/month to support Kalei for more interaction and exclusive content.
Login Signup
Available Now

Powered by Locals
About Community
Kalei Works
28 Members
Don’t have a Locals account yet? SIGN UP
I’m already a member Log in
Please keep this window open while your file is uploading...